Future generations will look at the numbers 2020 and cringe. What a year we’ve endured. From a human’s perspective, it’s been a disaster.. But from an environmental perspective, 2020 was an interesting one, so let’s review the highs of a testing period.

We had a fiery start…

It was a fiery start to the year as Australia battled record-breaking bushfires in January. 18.6 million hectares of land burnt and the cost to the environment was huge. The Malta National Aquarium sent a €1000 donation to the WWF Bushfire Emergency Fund as the world was stunned, and united in its effort to help. It was an eye-opener as catastrophic events often spur change and heighten awareness.

But ended with a discovery of a new species of whale

The tail end of 2020 gave us amazing news as the crew onboard the Sea Shepherd discovered a new species of beaked whale off Mexico’s west coast. Isn’t it amazing how we are still finding new species? This beaked whale looks and sounds like nothing we’ve ever seen before.

The fact that our oceans are the gift that keeps on giving is brilliant as precious little is known about beaked whales. They spend most of their lives thousands of meters below the waves and only a tiny amount have been studied. Just imagine, no one had ever seen or heard this species before. The excitement is incredible!

We had a world first: Induced coral spawning

Corals spawn once a year and are super sensitive to bleaching and other environmental factors. Environmental pressure has decreased the reproduction of coral, but the Florida Aquarium had an innovative solution. Using mood lighting to reflect Florida’s stunning sunsets and a little groovy music (amongst other scientific calculations) they have managed to induce Atlantic coral to spawn in a lab!

This is huge news given the fact that coral is vital for marine life, and the mortality rate is so high across our oceans, affecting hundreds of species.

Scientist Keri o’Neil said: “We were actually able to achieve a 95 percent fertilization rate with literally probably a million eggs, so it was really a massive spawn, and even with only the 30 or so colonies that we have in the systems, we have the potential to produce hundreds of thousands – maybe even millions – of coral offspring for years to come. This brings us hope for the Florida reef tract, because this species isn’t really reproductive in the wild anymore.”

A round of applause for our Florida colleagues!

And another shark release

We can’t forget one of our proudest moments of 2020 as we received another 12 baby sharks to be taken care of and released into the wild! We teamed up once again with Sharklab, who source the egg cases from local fish markets. Together we nurture them, guide them to hatch, pamper the newborns… until finally on our proudest day release them safely back into the wild!

14 nations have pledged sustainability for 100% of their ocean waters under their jurisdictions by 2025. Leaders of the following list of nations will fish sustainably and control their own territorial shores strictly, ensuring the protection of species to put an end to overfishing and unsustainable methods.

These nations prove magic can happen when we collaborate. 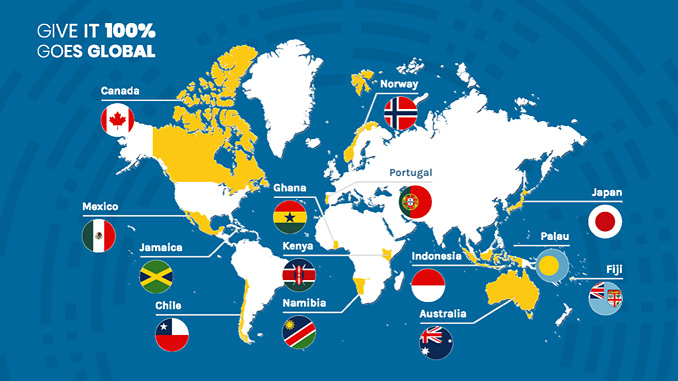 In 2020 awareness levels were heightened and Google was proud to report that Climate Change was amongst the top searched topics in 2020.

That piece of news is huge. If people are typing it in google, it means they are thinking of it, searching it, researching it and hopefully becoming more educated on the most important topic out there. Keep searching it, humans!

2020 also gave us many surprises. Marine biologists with Eco Marine Malta spotted over 30 short-beaked common dolphins in a research expedition for the first time in 3 years! Eco Marine Malta specialises on marine research in Malta and discovered this new pod in the southern region of our territorial waters. The significance of this pod is huge because they are listed as an endangered species in the IUCN Red List of Threatened Animals. They’ve endured a 50% decline in abundance over the last three generations and this was the first sighting of this species in 3 years. A rare, but welcomed find!

And we enjoyed a record for turtle nests in Malta!

2020 was an awesome year for local turtle numbers. 320 turtles hatched in our bays over the summer and this is amazing. One turtle, a loggerhead, laid eggs in Ramla bay in Gozo and it was the first time in 70 years that this species laid eggs there! Local NGOs had an incredible year dedicating several hours per day to watch and guard the nests, giving each turtle a strong chance of hatching.

So all in all, 2020 was a tough year, a year like no other, but a year which gave us a lot of positives despite the overarching theme this year!

Check out what the Malta National Aquarium has been up to! We aim to be environmentally responsible, promoting awareness and helping the marine life together with its environment.

The Malta National Aquarium is spread over 20,000 square metres. Our aim is to be the leading entity for preservation of marine life.